A Guide for Employers: LGBTQ+ Inclusion 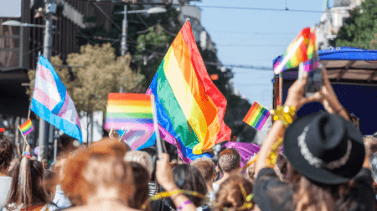 In this article, our Senior HR Consultant, Daniel Williams, offers a guide for employers when ensuring LGBTQ+ inclusion.

Everyone wants to feel they are included and a part of a safe community at work, this is why employers need to be aware of LGBTQ+ inclusion. As a new priority on the agenda, organisations across the UK are looking to support their employees in allowing them bring their authentic selves to work. No matter the size of the business, inclusivity shall be seen as a competitive advantage, rather than a chore or tick box exercise.

LGBTQ+ stands for lesbian, gay, bisexual, transgender, queer (or sometimes questioning). The “plus” represents the many sexual identities such as pansexual and asexual. The first four letters of the acronym have been used since the 1990s, but in recent years, there has been an increased awareness of the need to be inclusive of other sexual identities to offer better representation. The acronym is used to represent a diverse range of sexualities and gender-identities, referring to anyone who is transgender and/or same/similar gender attracted.

Why have LGBTQ+ inclusion?

There are several benefits to having LGBTQ+ inclusion in place, however this has nothing to do with validating sexuality in the workplace, but about ensuring all employees feel safe. Should someone feel safe the productivity and efficiency increase knowing that they can be their authentic self.

It can be argued that LGBTQ+ staff endeavour to hide their true identities at work to avoid discrimination, causing issues that relate to burnout and stress. Having a vigorous inclusion strategy makes sense from a business perspective, due to the mental health and absence related implications for their staff. From the ethical view, this is seen as a positive and attractive measure for candidates looking for a new role. The ‘best’ employers are the ones that understand the complex needs of their employees, by making them feel welcomed, respected and represented at work. From this attitude, everyone benefits.

From a legal stance, sexual orientation is one of the ‘protected characteristics’ therefore, a company should be aware of how they are avoiding discrimination within their organisation.

Why do people hide their true selves at work?

This question poses numerous arguments to why the employees feel this very way to begin with. Realising one’s sexual orientation or gender identify, then sharing this information is as gradual process. Despite the advantages of sharing this information, LGBTQ+ employees still do not disclose this to their colleagues. Therefore, as an employer you will encounter employees who are closeted at work, coming out takes courage and must not be forced upon others.

The many reasons why LGBTQ+ people remain closeted in work is due to:

However, this list is non-exhaustive and each individual has their own journey with their identity. Whether they are a blue collar or white collar, each person can struggle with opening up about the never-ending list above. The boundaries between personal and professional life can be blurred since the workplace is full of seemingly harmless chit chat such as how was your weekend/holiday? How is your wife, husband, partner? Every time these questions are asked, closeted LGBT+ people need to make a choice: Should I ignore the question? Lie about it? Avoid personal life discussions?

What can I do as an employer?

There are several ways that an employer can implement a strategy for inclusion; these may assist in making your workplace more LGBTQ+ friendly.

Offer LGBTQ+ Training – By offering training within the workplace as part of diversity or dignity and respect at work, this can be a powerful tool to educate those unaware or oblivious to issues that relate to LGBTQ+ people. Training such as this can correct terminology and phrases that are negative connotations; it may retain talented employees who are LGBTQ+ and encourages a cohesion between the teams.

Start an LGBTQ+ Network – By growing a network where staff can be supported is a great way to show you are making the workplace safe for those that need it the network can look at areas where they can improve on anything that could affect LGBTQ+ employees at work.

Appoint LGBTQ+ Allies – An LGBTQ+ ally is somebody that is non-LGBTQ+, but they are passionate about those who are and champion others as heterosexual and cisgender individuals in a society focused on cis-normativity and heteronormativity to counter discrimination against LGBTQ+ people.

Celebrate LGBTQ+ History – There are many events such as Pride, Transgender Awareness and LGBTQ+ that company’s should be aware of and celebrate, just as they would any other holiday. This shows that inclusion happens throughout the year and is not a one off intervention.

Reviewing of Policies – Policies and procedures are there to set the guidelines on how to behave or how things operate at work. Your Equal Opportunities or Diversity and Inclusion (or other term) policy should highlight this topic and show the company’s commitment to tackling discrimination for sexual orientation. However, there are further polices that need to be inclusive, such as adoption, paternity, maternity and parental leave. For example, you may have a lesbian woman that may want to take paternity leave for her pregnant partner. It is about the education piece of is this reasonable and how can we accommodate this?

Displaying pronouns – Pronouns are used in place of a proper noun, such as someone’s name. For example, ‘he/him, ‘she/her’ and ‘they/them’. By adding pronouns to social media platforms (like LinkedIn) and email signatures, and stating them in meetings has become standard in order to know how to address a person, which removes the assumption of knowing a person’s gender and is used to support non-binary and transgender people in the workplace. To avoid bias within documentation, we can use ‘they’ and ‘them’ to create gender-neutral documentation.